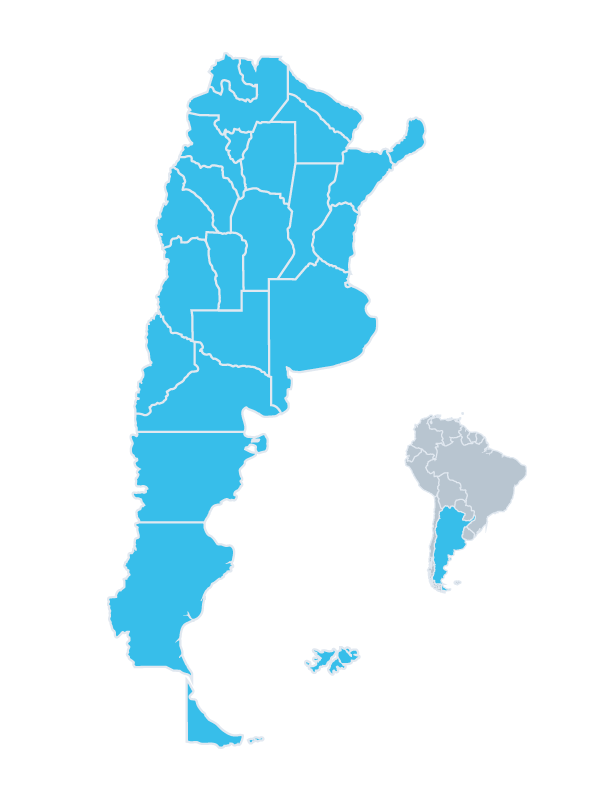 Location: Argentina is the second largest country of Southamerica (around 2,78 kms). It borders in the North on Bolivia and Paraguay, in the East on Brazil, Uruguay and the Atlantic Ocean, in the West on Chile and in the South on the Antarctic Ocean.

Population: Approx. 40 million; as many Spanish, Italians, Germans and French immigrated, the Argentinean nation is the most European influenced nation of the subcontinent.

Politics & Economy: Argentina is a democratic republic. Around 33 % of the working population works in the processing industries, 17 % in the agriculture and forestry (especially important is the life stock breeding, where sheep, and not cows or bulls, are dominating). The tourist sector is developing fast and getting more and more important for the country's economy.

Climate: Considering seasons are exactly opposite in the Southern and in the Northern hemisphere, warm temperatures are between November and March and the coldest ones are between June and September. April, May and October have mild temperatures. The thermic fluctuations are very wide between the North (Salta/Jujuy/Tucumán/Iguazú) and the South (Patagonia region). In the North it is hotter and close to the Cordillera de los Andes the climate is drier. In the South it is colder and towards the East it is more humid as a result of the closeness to the Atlantic Coast.

Best Travel Time: Due to the extension in latitude, Argentina offers different climates and allows to be visited in any time of the year, especially from October to March (spring and summer time). The best season in the South (Patagonia) is summer, with mild temperatures and longer days. Winter is ideal to visit the Northeast (Iguazú Waterfalls) and the Northwest (Salta/Jujuy/Tucumán), as that it doesn´t rain so often and the subtropical temperatures descend some degrees. Autumn and spring are more recommended to visit Buenos Aires and the Cuyo region.